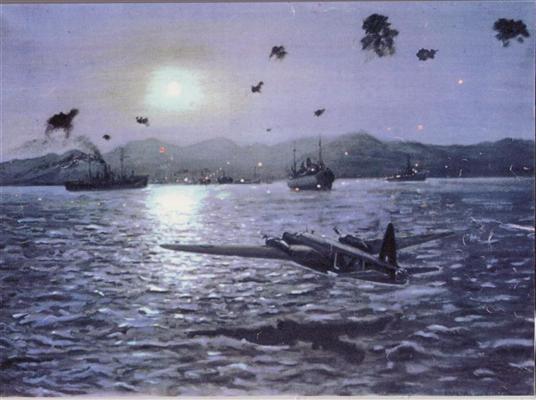 No. 458 Squadron, Royal Australian Air Force, was formed at Williamtown, NSW on the 10th July, 1941. From its base in Britain at Holme-on-Spalding Moor (in Yorkshire), the Squadron commenced operations over German occupied Europe on the 20th of October, 1941. It was equipped with Vickers Wellington medium bombers and was part of 1 Group Bomber Command.

In January 1942, No. 458 Squadron was relocated to Middle East Command. Based at El Shallufa in Egypt, the Squadron was trained in techniques employed to attack ships and submarines with both bombs and torpedoes. Henceforth No. 458’s primary role was to seek out and attack enemy shipping in the Mediterranean Sea. As seen on its banner, its aircraft went on to operate from many different airfield locations in Egypt, Palestine, Malta, Libya, Tunisia, Algeria, Sardinia, Corsica, Sicily, Italy and Gibraltar. The Squadron also supported the Allied invasion of southern France in August 1944. No. 458 operated until the 9th of June 1945 (the end of the war in Europe had occurred on May 8th, 1945).

The Squadron’s banner also shows its crest with the flying torpedo (indicating its primary role of anti-shipping operations in the Mediterranean theatre of war) and the corresponding motto: Invenimus Et Delemus: We Find and Destroy.  Close to 1750 personnel from Australia, New Zealand, Britain, Canada, and South Africa proudly served under No. 458

The Squadron’s wartime service is recorded per standard Defence Department procedure of the time, in the Official Operations Record Book.  822 pages tell the story from Squadron formation in July 1941 through almost 4 years of war service to disbandment in June 1945. This once TOP SECRET document provides a valuable insight and accurate record of what took place daily/weekly in the life of this RAAF unit...

National Archives of Australia - 458 RAAF Squadron Operations Record Book (type in: 458 Unit History in the search line, then click on the Digitised item)