The goal of this website is to preserve and perpetuate 458 Squadron's impressive history and to pay tribute to those who served with the Squadron. This website will provide invaluable information to those who are interested in their family's history and in general, the history of a unique RAAF Squadron that served during World War 2. 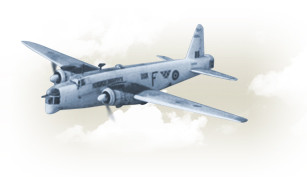 ln 1940, Churchill said "The fighters are our salvation but the bombers are our means of victory". Over the years, much attention has rightly focussed on the airmen and women who bravely served during the Battle of Britain and protected our land from the enemy. Less attention has been given to those who flew bomber and maritime aircraft. Over 55,000 airmen from Bomber Command lost their lives so it is fitting that their contribution will finally be acknowledged at the official opening of the Bomber Command Memorial in London.
When I joined 458 Squadron in 1944 its bomber and torpedo dropping role had recently changed and it assumed a convoy escort, submarine search and air-sea rescue role. I like to think that the squadron was responsible for saving the lives of many merchant seamen and doomed aircrew. However, many of our comrades paid the ultimate price and I would like to pay tribute to their bravery as we remember them almost 70 years later.
— The Late Leon Armstrong, past 458 Squadron President, Finstall Village, Bromsgrove, Worcestershire, United Kingdom

Honouring those who served in 458 Squadron RAAF during World War II. Formed at Williamtown (NSW) in 1941, 458 Squadron flew Wellington aircraft over Europe from Holme-on-Spalding Moor, Yorkshire, United Kingdom. The Squadron later operated from North Africa, Malta, Sardinia, Italy and Gibraltar in bombing, anti-shipping and anti-submarine strikes in support of the North African and Italian Campaigns. The Squadron was disbanded on 9 June 1945 in Gibraltar.
Lest We Forget
— the late Keith Cousins, past President 458 Squadron, Sydney, New South Wales, Australia

On behalf of 458 Canadian Flight Members we extend our congratulations to those responsible for the initiation of the new 458 Squadron Website. We wish you every success in achieving it's very worthwhile goals to preserve and perpetuate 458 Squadron's impressive history and to pay tribute to those who had a role in building that history. The website will provide invaluable information to those who will follow and are interested in their family's past history. So from Canada we again wish you success and say "Great Job and Well Done Mates!"
— the late Tom Lindsay, past President. 458 Canadian Flight, Vancouver BC, Canada

Wishing the entire 458 family a joy filled Christmas and a prosperous New Year in 2023!

Marching in Melbourne CBD towards the Shrine of Remembrance. Lest We Forget.