At 0435 hours on the 9th January, deep in the winter of 1942, Wellington R1785 of 458 Squadron, RAAF took off from the Holme-on-Spalding Moor air base in East Yorkshire. Their mission was to join with 30 other bombers to bomb the port of Cherbourg in occupied France, to mount a diversion for a larger group of 131 RAF bombers that were assembled and dispatched to the French harbour of Brest to find and destroy the German pocket battleships, the Scharnhorst and Gneisenau. 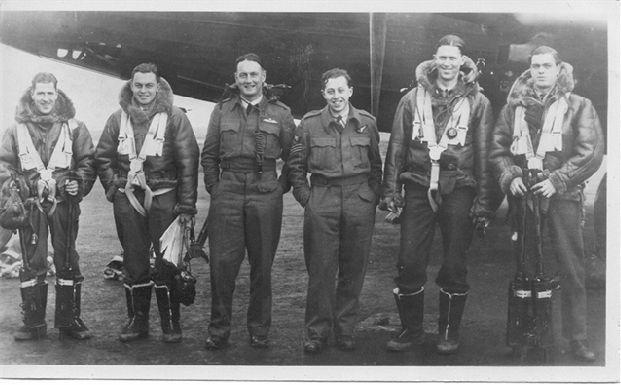 Weather conditions over the Normandy peninsula that January morning were appalling, snow was falling, visibility was negligible and to make matters worse the German flak was particularly active. Only three of the 31 aircraft were able to drop their bombs and many were forced to turn back. Of the three Wellingtons from 458 Squadron that left Yorkshire, only one returned home to base. Wellington Z1312 was hit by flak but managed to reach England with its load of bombs intact but crashed in Dorset after hitting high tension lines, killing 4 of its Australian crew with only the pilot and co-pilot surviving.

Wellington R1785 disappeared completely. The log books of the crew were signed off in red ink with the notation

"OPERATIONS AS ORDERED, BUT FAILED TO RETURN".

The fate of R1785 and the crew remained a mystery to relatives for over 66 years until Georges Dennebouy, an Air France captain, began researching a war time incident on his family's farm at Colomby in Normandy. In time, Georges teamed up with three other researchers, Mickael Simon, Claire and Claude Letallier who had started to unravel the mystery a decade earlier by interviewing and recording the accounts of eye witnesses of hundreds of pre D-Day aircraft crashes over Cotentin in the department of La Manche.

It was in the winter of 1942 that Georges' grandmother, along with other locals, saw a plane in flames flying at low altitude before it crashed into a snow covered orchard before dawn. Together with other inhabitants they were on the scene before the Germans, but were powerless to do anything as the aircraft was on fire, except for the tail section, and were not helped when German soldiers roughly made them leave the scene.

Two days later the Germans requisitioned 2 local farmers, a teenager, Joseph Anquetil and Mr. Auguste Mulot, a veteran of The Great War, to recover the bodies, and place them in coffins provided by the occupying forces. The bodies were awfully calcined except for the young blond haired tail gunner who remained trapped in his turret, the floor strewn with lolly wrappers, testament to the loneliness of a rear gunner's station. Joseph Anquetil remembered very well the military honours given to the victims by the German soldiers who presented arms and who also filmed the scene.

A few days later, a group of Germans began to salvage parts of the plane, but to their horror they discovered that the plane still carried its 8 bombs of 250lbs! Bomb disposal experts were called in to detonate the bombs and the enormous explosion volatized the Wellington with one of its engines leaping well over 100 metres.

The Germans then made a macabre discovery when they found a sixth body under a wing and ordered yet another inhabitant, a youthful Roger Blestel, to remove the seriously mutilated body and place it in a coffin. This proved to be the body of Wally Forgan, the front gunner, who is presumed to have attempted a parachute jump, as he was hung on the wing at the end of his suspending rods, that somehow snagged the wing as the plane made its fiery descent.

In 2005, the group of amateur aviation historians undertook a ground search of the Breul farm crash site to confirm that the wreck was indeed a Wellington, and to match the crash to the graves of 6 allied airmen buried in the old Cherbourg cemetery. Using a metal detector Claude Letallier recovered various fragments of aircraft and located a part of the airframe's distinctive geodetic design bearing a serial number which was sent to the British Aviation Archaeology Council. The BAAC confirmed that it was from a Vickers Armstrong Wellington.

Their search took a new twist when amongst the innumerable boils of recovered twisted metal there was a silver ring. It was clearly not a French ring but a Sterling silver ring of the Commonwealth, bearing what appeared to be the initials of one of the unfortunate crew. But the initials in flowing script LMM did not match those of R1785 crew members; maybe it bore the initials of a girlfriend or fiancé? For three months emails and letters flowed between France, Australia and the UK trying to solve the riddle, when one day Mickael Simon reversed the piece of contorted metal and saw the initials of "WWF'. Overcome with adrenalin and emotion, they had found the proof they were looking for. The ring once worn on the right hand of William Wallace Forgan confirmed that this was the crash site of the 6 airmen whose remains lay in Cherbourg.

Emotions ran high on the other side of the world when the Forgan family was contacted in Mount Gambier, South Australia and were sent photographs of the ring. Georges and his colleagues in turn, were also surprised to learn that David Johnstone, a nephew of Vic Johnstone and Nick Hayes, a great nephew of Wally Forgan had flown together in skies far less hostile for an aviation company in the Northern Territory, completely unaware that 60 years earlier, their relatives had also forged friendship in the skies over Europe.

In March 2006 Georges Dennebouy and his wife Liliane flew to Australia with the express purpose of visiting the Hickey family in Brisbane, the Forgan family in Mount Gambier and Adelaide and the Johnstone family in Lockington, Victoria. At an emotional gathering in Adelaide, Georges returned the ring back home to the Forgan family and it was here that yet another coincidence occurred. Fred Hinton's (the RAF air gunner) late sister had migrated to Adelaide after WWII, and a nephew and a niece of Fred from Leicester were also very much a part of the occasion.

The dedicated work of Georges, Mickael, Claire and Claude gave closure to a number of families in Australia, NZ and the UK. It rekindled contact between the families of the air crew and brought back the times when the parents of the lost crew corresponded together in hope, refusing to believe that their sons were lost until they failed to return home to Australia after hostilities ceased. This correspondence continued until this grieving generation died out.

In Adelaide, Georges said that their work was unfinished.

"It is out of respect and gratitude to these young people who came from far away lands we carried out this research. We hope that a memorial to the crew of R1785 and for the many pilots and crews who perished in the air, and on the ground of Cotentin, will be raised to honour those who died to return our freedom to us."

In early October 2008, a magnificent granite stele was erected in the heart of the tiny village of Golleville (population 160). Relatives of the Australian airmen and Fred Hinton (RAF) made the pilgrimage to France to attend the unveiling of the stunning memorial in the shape of the Wellington's tail plane. On a Saturday afternoon, what appeared to be the entire village, local school children and visitors from neighbouring towns and villages attended a moving ceremony that drew Members of the French National Assembly, Squadron Leader Tramter, RAF, Mayors past and present and other dignitaries to pay their respects to those young men who gave their lives for freedom.

Some of us who listen to the Australia All Over program, on a Sunday morning with Ian McNamara, may have heard members of the Australian contingent ring in with their emotional account of the day. Tribute was paid to the persistence of the amateur research team, the genuine gratitude of the French, their overwhelming hospitality and organizational skills that would equal or surpass the International Olympic Organizing Committee.

The memorial has received other relatives since its dedication and as Georges Dennebouy stated,

"This memorial will serve to remind following generations of the enormous sacrifices made by those who came to our aid so far from their own homes, family and country"

Re-printed from the Squadron Newsletter #235, August 2009 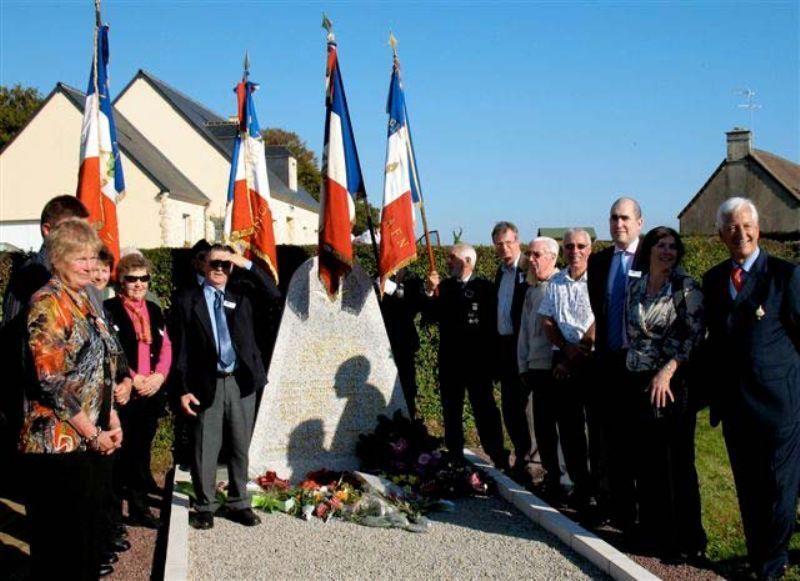 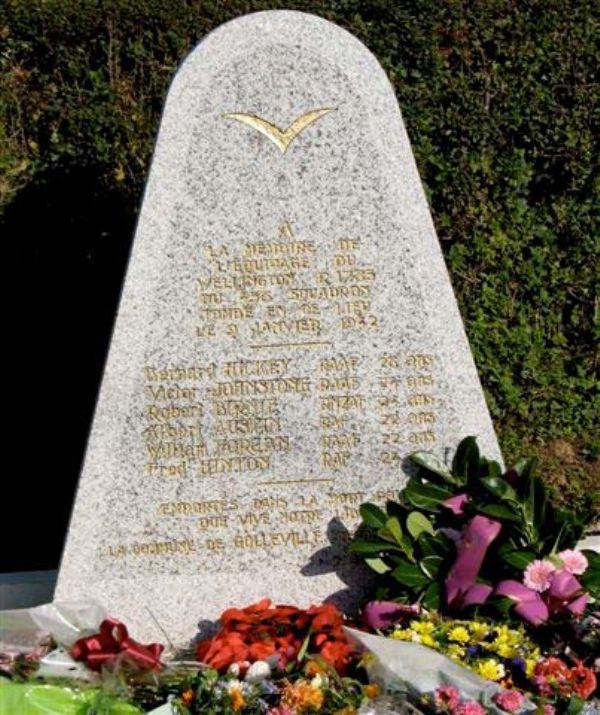