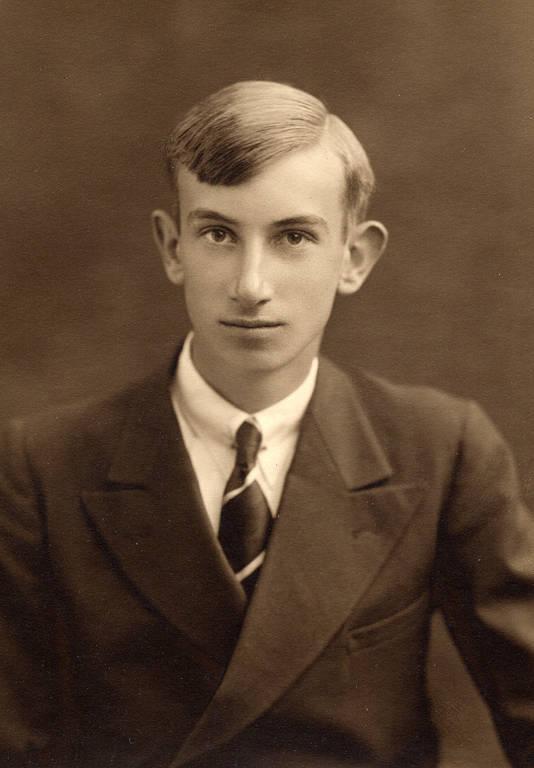 These notes on R. H. Prior’s wartime activities, put together by his son M. L. Prior and daughter H. M. Prior, are based on recollections of stories that he sometimes used to tell, together with information from his flying log and a few other papers.

Richard Henry Prior, often known as “Dick” or “Sam”, was born in Sussex near Chichester. His own father died when he was a young child, and he and his two sisters were brought up by their mother with the help of numerous uncles. He was educated at Eastbourne College, and then was the first member of the family to go to university, obtaining a mathematical scholarship to Christ Church, Oxford in 1934. After graduating three years later, he held one or two temporary teaching posts until joining the staff of King’s School, Canterbury shortly before the war began.

In 1939 or 1940 he helped in the evacuation of the school from Canterbury to Carlyon Bay in Cornwall. During these early stages of the war, Dick was a conscientious objector. He came from a strong evangelical background – having been brought up a Plymouth Brother – and he nearly always considered violent conflict as a foolish way to try to sort out human problems.

However, as the situation became darker and the nature of the Nazi threat became clearer, the subject preoccupied him. He prayed constantly that the Nazis should be stopped, and gradually he felt the answer that kept coming back: “What are you doing about it?” This led him to withdraw his objection in the autumn of 1940. He joined the RAF as a navigator, since his background mathematics would have been useful for this; but it turned out that the need for pilots at the time was more urgent, so he changed tack and was re-mustered as a pilot.

He was sent for training to the USA, and spent a large part of 1941 learning to fly in Oklahoma. One amusing incident from this time was on one of his early solo flights: he got disorientated flying over the vast, featureless plains, and was unable to find his way back to the aerodrome. So he landed the plane on a field near a farmstead, coolly got out and asked someone for directions, and took off again in the right direction, arriving back at the aerodrome with no further trouble.

When qualified as a Wellington pilot, he was posted to Egypt as a member of 458 Squadron in July 1942. The situation seems to have been chaotic: for his first war operations – bombing stores and attacking shipping in the area of El Alamein – he was attached to different squadrons: first to n° 37 Squadron and then to 221 Squadron. This continued until early October. I remember him saying that on his arrival, shortly before the appointment of Montgomery as commander, morale was very low: everyone was ready to pull out. But with Montgomery’s arrival the atmosphere changed completely: everyone found new energy and there was no more talk of retreat.

This first tour of active duty involved several adventures. One event is recorded in his flying log: “6.1.1943. Torpedo exercise in bay. Starboard engine seized 60 miles from base and lost airscrew. Tyre burst on landing and undercarriage collapsed”. But the crew escaped unharmed. A note beside a photograph taken after this incident mentions that the collapse was due to piles of sand on the runway. I remember him talking about this – I think the runway was a new one (the nearest they could find, obviously not wanting to fly further than necessary on one engine) and not yet officially open for service. On touching down on the runway, he noticed the piles of sand and managed to bounce over the first two, but did not have enough speed any longer to do the same for the third, provoking the collapse.

In fact, bouncing a little on landing was in any case a part of his personal flying style: he was sometimes known among his companions as “Three-bounce Prior”!

His narrowest escape was not long afterwards, on 31st January 1943. The squadron’s Wellingtons were fitted with a still new and very secret radar system, and he recounted that this was in its infancy and not very reliable. On that night, as they searched for enemy shipping somewhere towards Italy, the radar suddenly indicated a ship several miles off. The technique apparently was to fly as low as possible, just above the waves, to be out of reach of the ships’ anti-aircraft guns (which were designed to fire only upwards) and to attack with a torpedo aimed towards the ship’s silhouette against the moonlight reflected on the sea - or, if there was no moon, to drop a flare and circle round to attack from the other side. So on this occasion they headed in the supposed direction of the ship, only to find to their horror that it was not several miles off but directly below. The ship’s guns opened fire, and some of the flack hit the plane. Fortunately none of the crew was injured. The structure of the Wellington was a light frame covered with tightly-stretched canvas, which would allow flack to pass right through without doing serious damage, provided the engines or fuel tanks were not hit. But the fuel gages dropped down to zero and the engine instruments stopped working. Imagining that the fuel tanks had been pierced and that the engines would halt at any moment, they turned and made for the coast, parachutes at the ready to bail out into the sea as soon as the engines cut out. But the engines did not cut out. In the end it turned out that the fuel tanks had not in fact been punctured; only the instrument cables had been severed, causing incorrect readings. My father succeeded in flying back to base with failed engine instruments, the crew of six all safe and sound. For this exploit, he was awarded the D.F.C.

From March 1943 for about a year he was not on active missions but at Limavady in Northern Ireland, training to become a flying instructor (he qualified in August 1943) and then in early 1944 working as a flying instructor at the British base of Ein Shemer in Palestine. From May of that year he was attached to 221 Squadron. He was given command of the squadron with the rank of Wing Commander in August 1944, when the previous commander “Paddy” Simpson was wounded and unable to return to duties.

This period with 221 Squadron was a relatively enjoyable part of the war. The majority of operations were no longer attacks but consisted largely in dropping either supplies of food and clothing, or propaganda and information leaflets to isolated groups all over Greece and the islands. It was satisfying to see people below opening the packets of supplies or reading the information leaflets. On one occasion, a packet of leaflets failed to open, and dropped straight down to land just beside a grazing donkey, who bolted away in terror! The territory was mountainous, and some of the goals of the operations were in tricky places. I remember my father recalling one situation when the target for a load of urgent supplies was hidden by low cloud; he stalled the plane to drop down through the cloud layer – a standard manoeuvre for small training planes but not for medium bombers like Wellingtons – and the supplies were duly delivered on time.

In the second half of 1945 he was moved to the Middle East and he spent the last part of the war in administrative work at Air HQ Iraq and Persia.

Looking back, he was often surprised at how fortunate he had been, not only to have passed through the dangers of the war unscathed and with surprisingly little hardship, but also to have been posted in some fascinating places. His photographs from Egypt, Greece, Palestine, Iraq and Persia bear witness to his interest in the culture and history of these places.

After the war he continued his career as a teacher: for many more years as housemaster at King’s School Canterbury; as Headmaster of Okongwu Memorial Grammar School in Nigeria (1960-1963); as master at Bradford Grammar School (1964); and Headmaster of Oxford School from 1965-1976. In 1965 he married Joan Wooler, from Ilkley in Yorkshire, where he stayed while working at Bradford. Mark and Hazel were born during his Oxford School years. He took early retirement in 1976, then did two more years of Maths teaching at the John Hamden school in High Wycombe, before retiring properly to Herefordshire.

All this meant incessant house moves, a habit which remained – the family lived in three different houses on the Welsh borders in Herefordshire before Dick and Joan finally moved to Shaftesbury in Dorset, where he spent his final years. He died peacefully at home in 2007 at the age of 91, much diminished by Alzheimer’s, but still himself.

Our dad was what you might call an eccentric, but his eccentricity was a mix of wisdom and a sense of fun. ‘Fun’, in fact, was one of his most-used words. Lively and enthusiastic, with a passion for nature (particularly ducks!) and strong Christian conviction, he lived life to the full. We remember him as a family man, and he enjoyed nothing better than taking us all out for picnics. These took place every Sunday come rain or shine. Not being one to sit still for long, he would walk round munching and exploring simultaneously, returning to the family rug every so often for another sandwich. On walks it was difficult to keep up with him and he zoomed up Scottish mountains at a rate of knots. This energy also seems typical of his working life before we existed: his friendly and funny maths lessons, the care he took over the wellbeing of his boys as housemaster, his hard work and commitment as headmaster. He was a quick thinker and highly practical; never a sulker when things went wrong, but a finder of solutions. As such he must have been a valuable part of his team during wartime. Above all, to very many people he was a loyal and supportive friend. 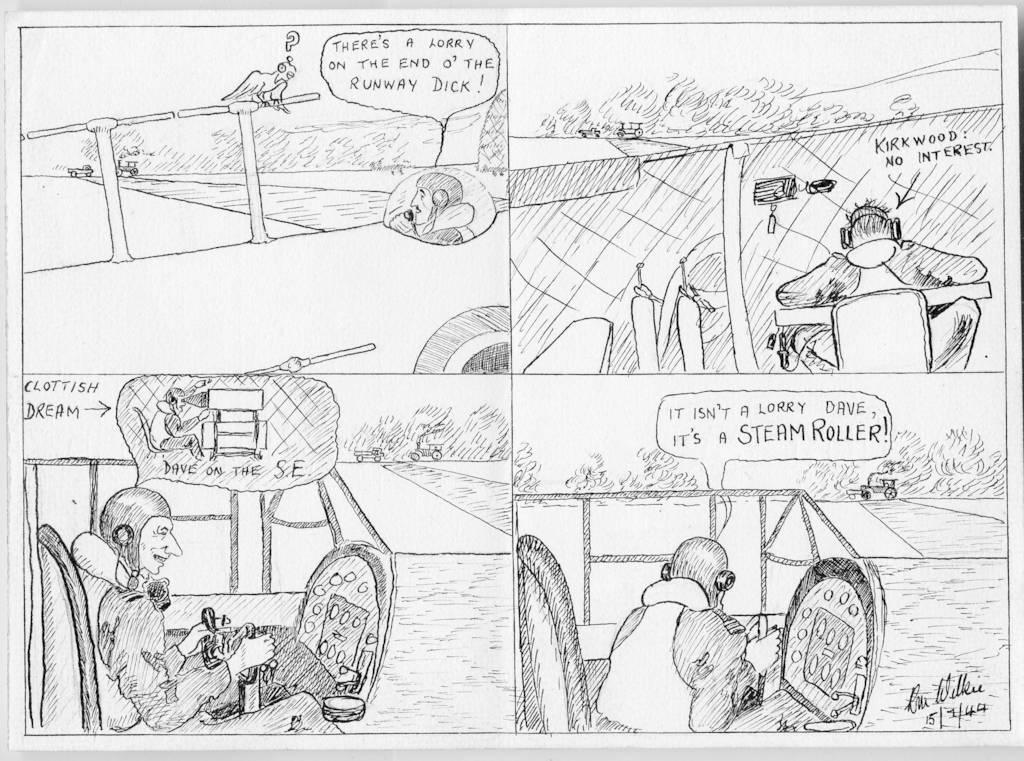 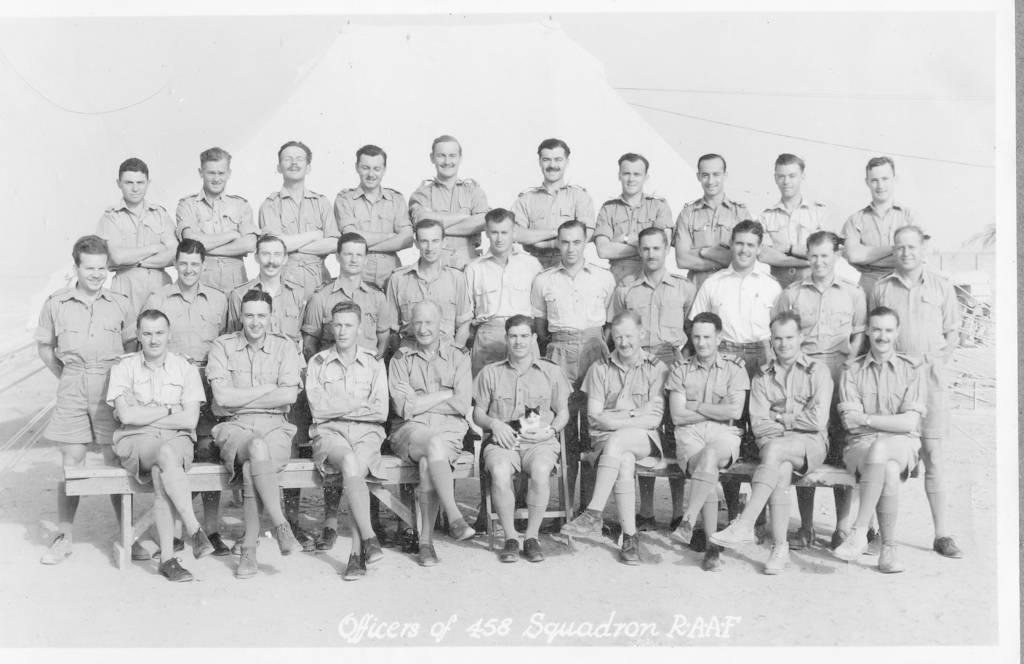 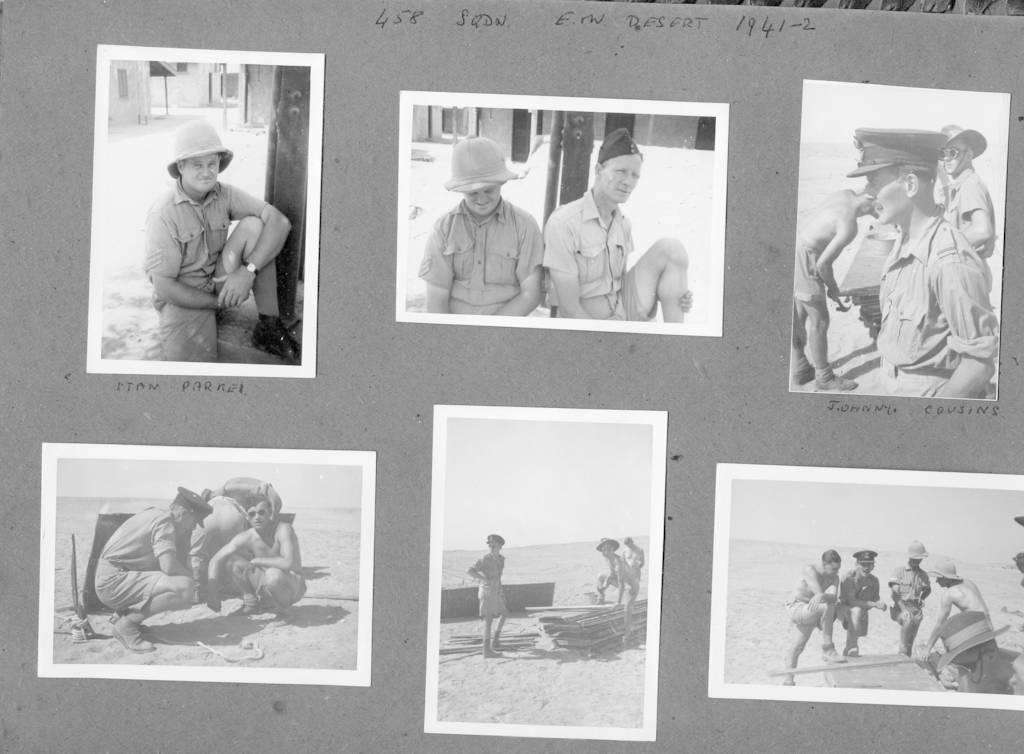 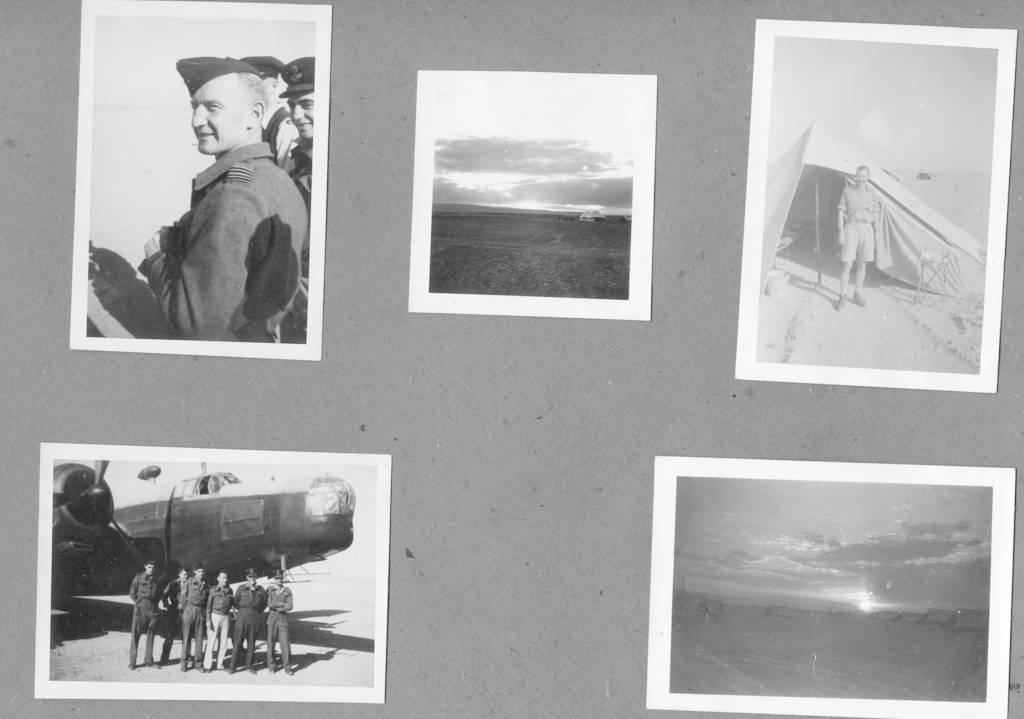 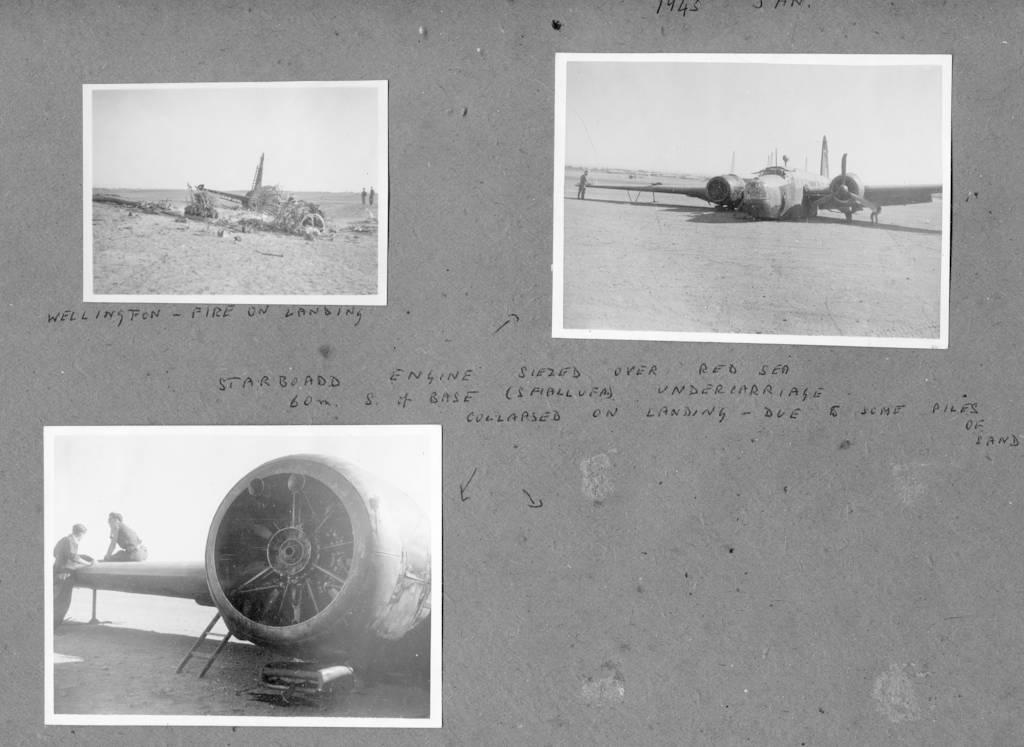 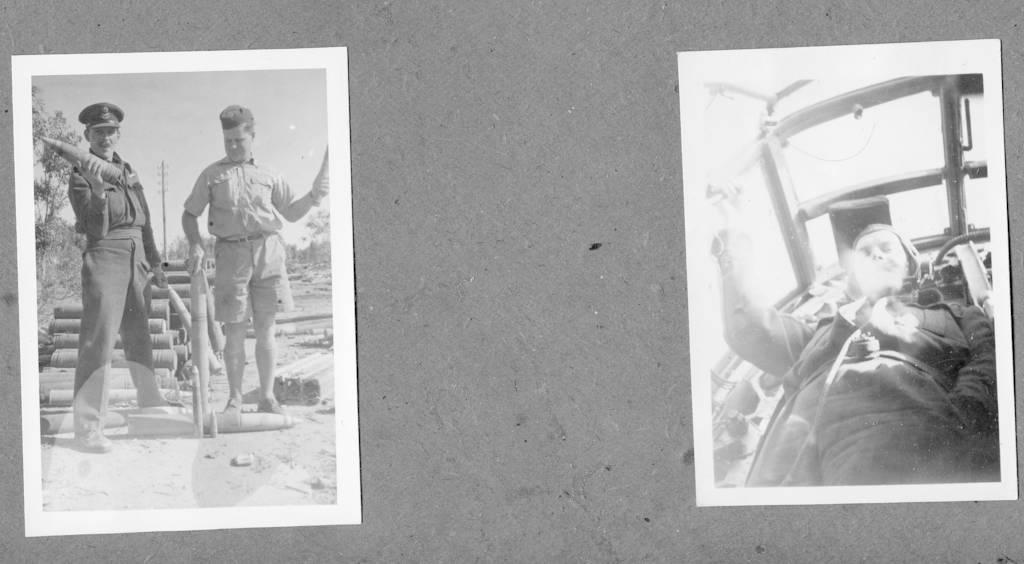 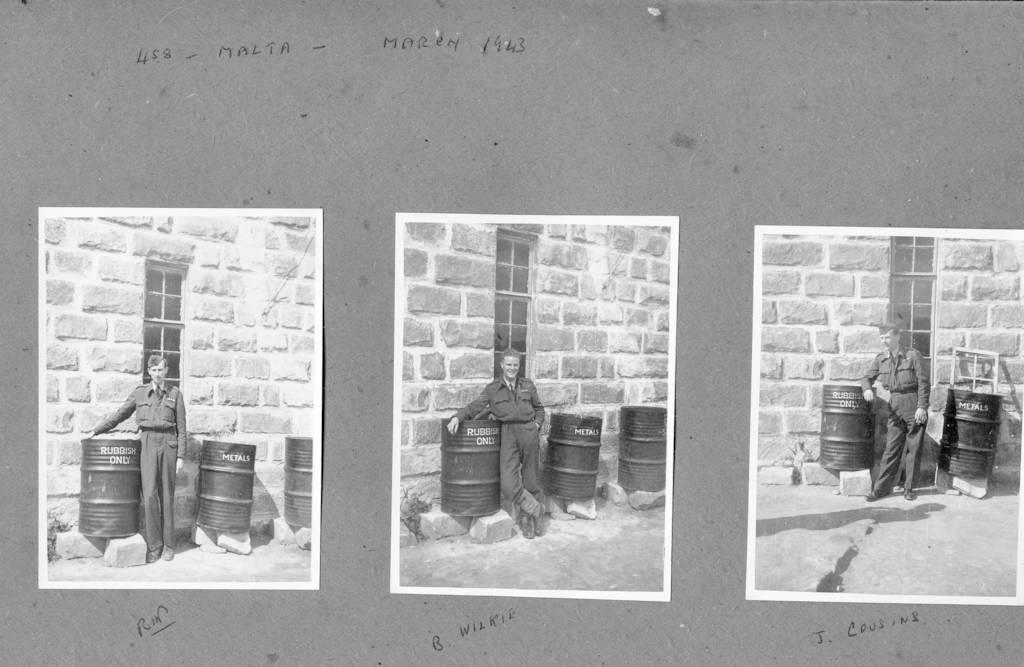 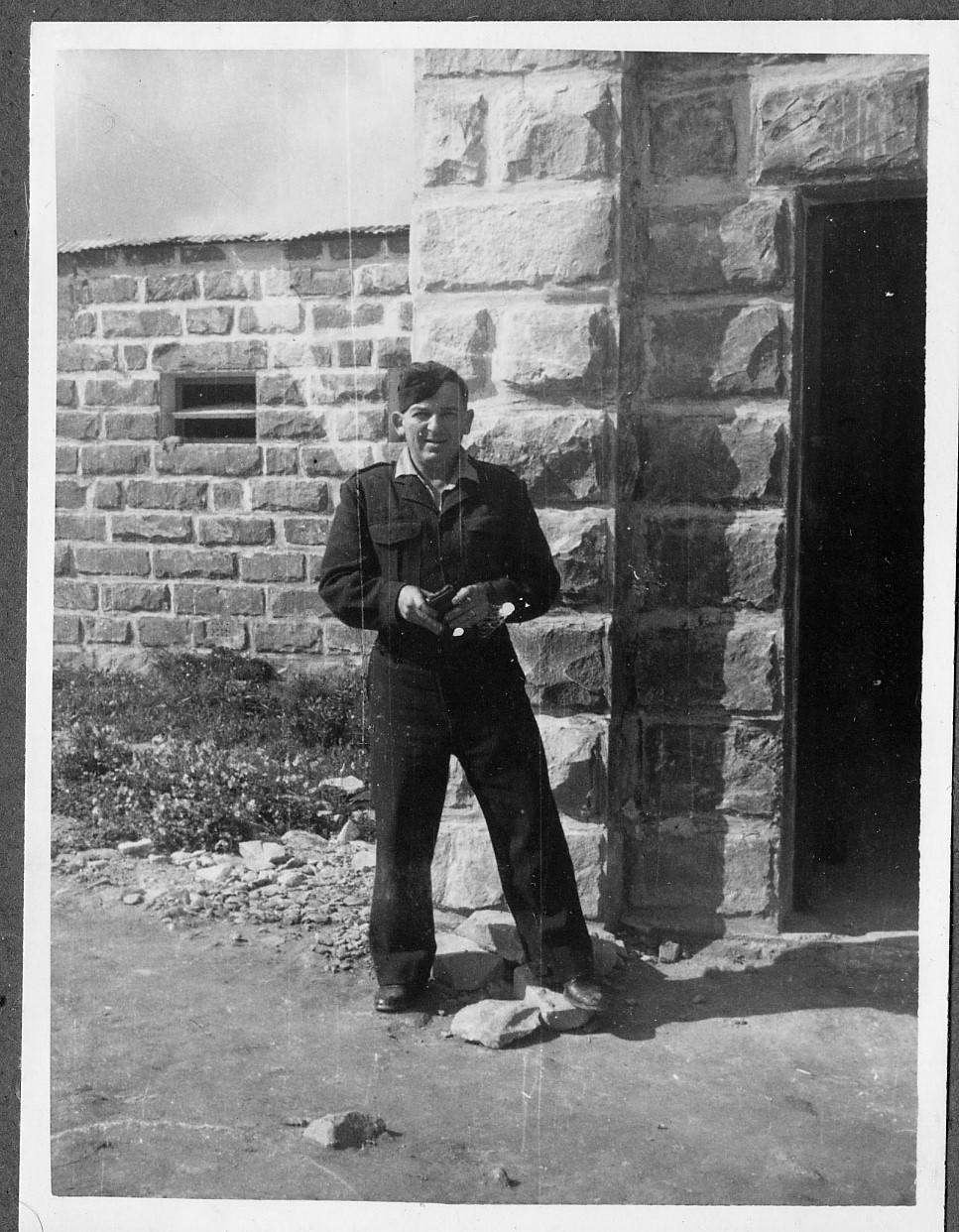 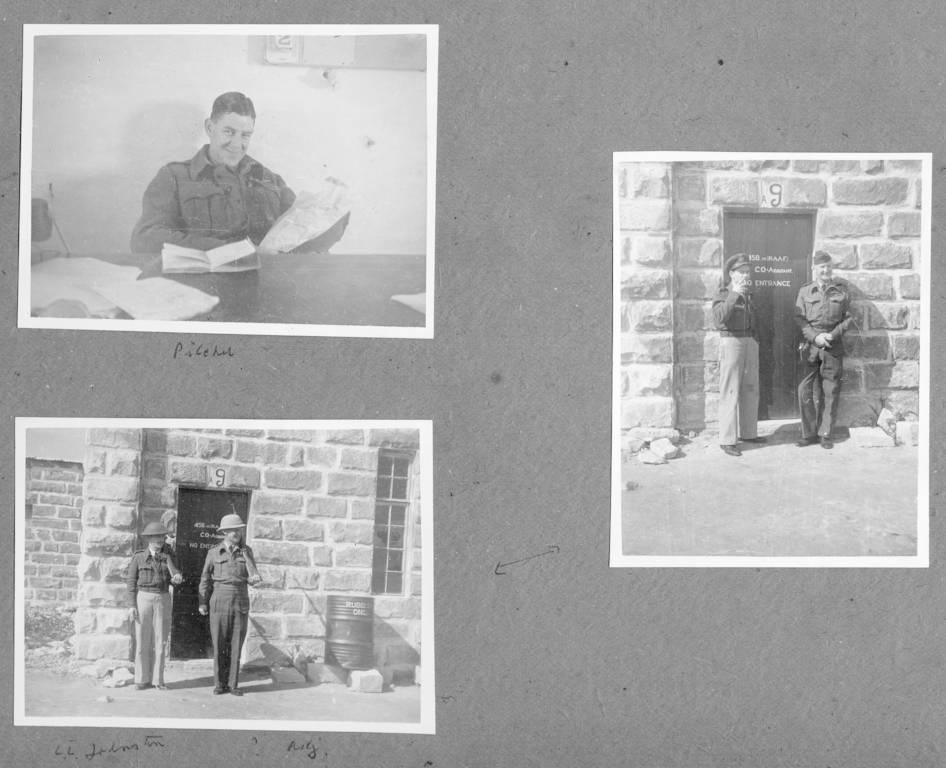 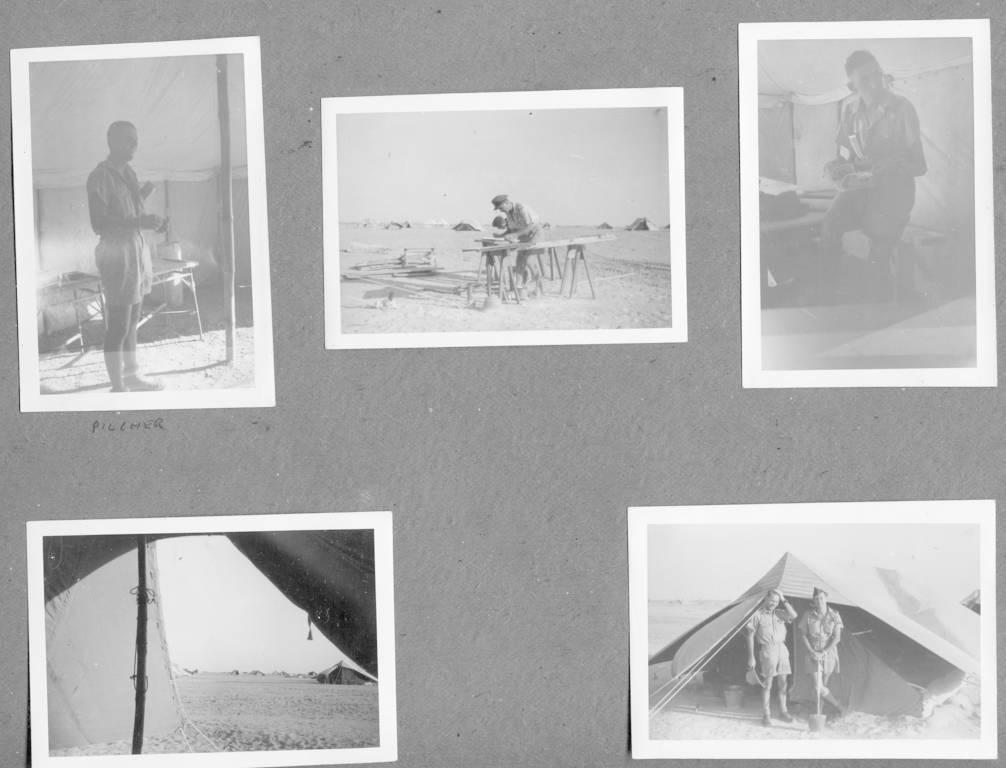 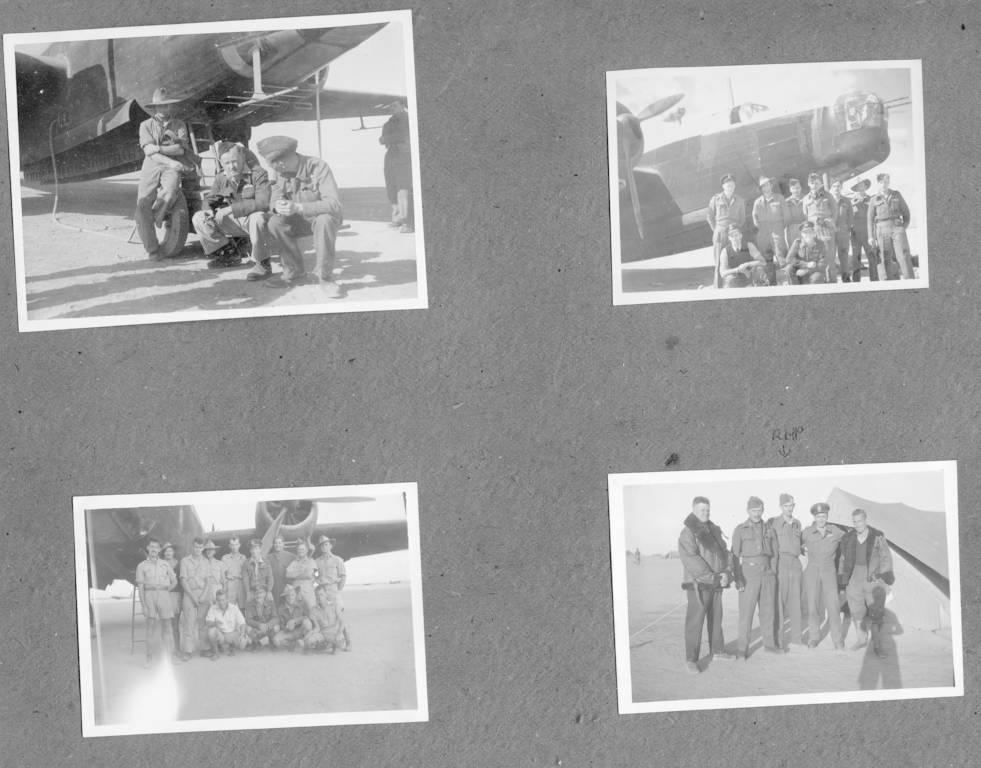 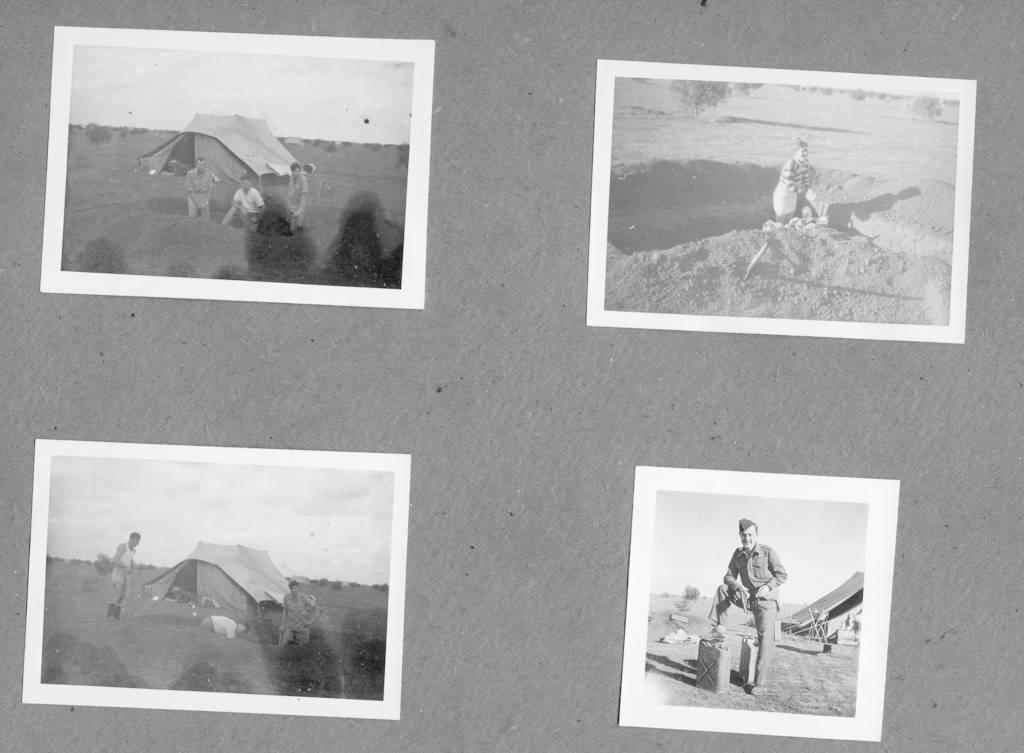 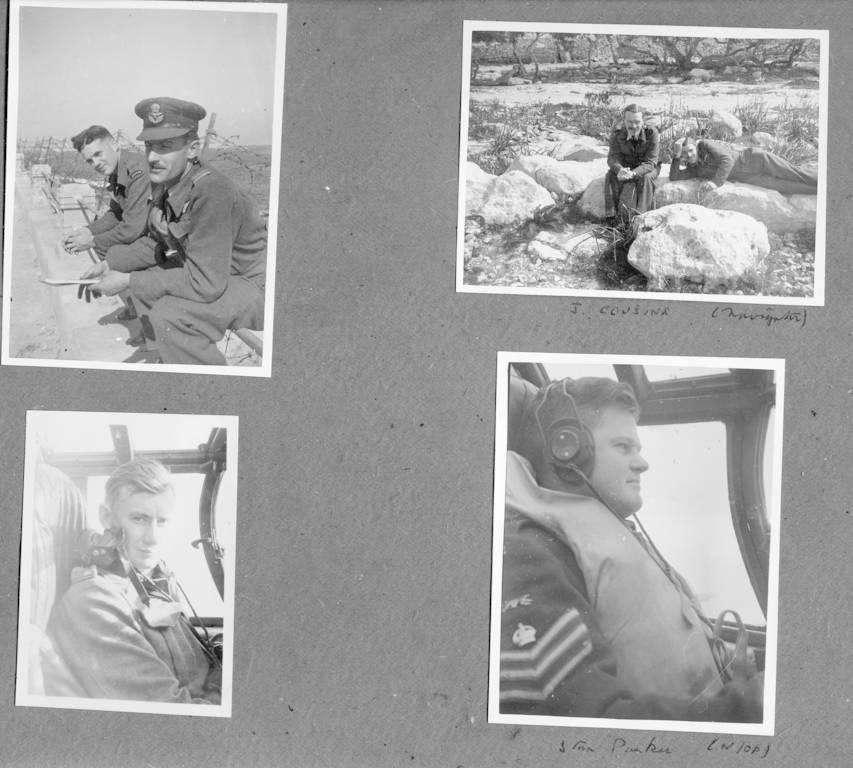 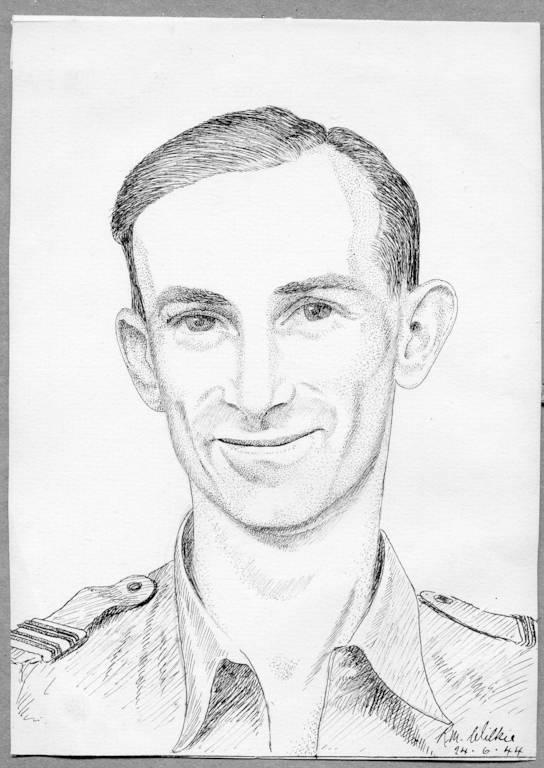 Sketch of Dick Prior drawn by a war-time colleague