As an office boy in the Brisbane Shell Company, Bill McFadden wanted to join the RAAF, but any employee in that company in war time was considered to be in a "reserved" occupation. He  pleaded with his boss, who eventually said, "I know you look only at the stars, young Bill – so yes, you can go."

Like so many young men of the time, eager for adventure and excitement, he began his pilot's training in Narromine NSW.  The Empire Air Training Scheme made it possible for him to sail to Saskatoon in Canada where in 1941 aged 21, he was awarded his wings. On the night of July 4,1941, the group arrived at 21 OTU (Operational Training Unit) in Moreton-in-Marsh in Gloucestershire.  The huts were all there waiting for them with beds and blankets but no sheets – nor any food.

The next day, they were told they had to hand in their uniforms and pay books, (indicating that their pay would henceforth be that of the RAF) and that their RAAF uniforms would be replaced with RAF ones.

One of them contacted the RAAF Overseas Headquarters in London to get the situation clarified. The next day, to the surprise of the guard on the boom gate, an imposing black Humber drew up, complete with flag and in the back seat, Air Commodore "Frank" McNamara, VC, in dark-blue RAAF uniform. 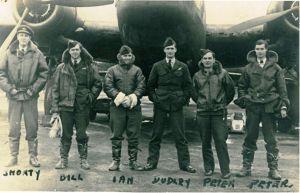 When the guard saw the visitor's rank and Victoria Cross, he snapped to attention, saluted smartly, raised the boom gate and waved the Humber through onto the base.  The driver pulled up at the door of the admin building.  McNamara emerged from the car and asked to be shown the office of the base commander.

All the Australians moved onto the parade ground. McNamara then announced that they were not to surrender their RAAF pay books.  They were to remain in the dark blue uniform of the RAAF with the insignia, "Australia", on the shoulder.  Bill remembers the huge sigh of relief that met those words.

Bill McFadden, the son of a teacher and a metallurgist, joined 458 Squadron. On October 22,1941, he went on his first operation, a night bombing raid on German ships and U-boats moored in the harbour at Le Havre, France.

On the way back, after dropping the bombs they got lost. McFadden was second pilot and the navigator was appropriately called Perdue. They had crossed the channel, but over England they could hear the ominous sounds coming from the balloons that had been strung up all along the south coast of England. They used a code to say they were friend and not foe. Soon they saw a series of dual search lights which guided them, pair by pair up the length of England, until they stopped to indicate the place to land. This they did, still in complete darkness. McFadden got out of the plane and found they had landed in Squires Gate, an airfield near Blackpool, up on the west coast of England.

At 17.30 on December 27, 1941, the crew of a Wellington, with McFadden as second pilot took off from Holme-on-Spalding-Moor, Yorkshire. Nearing the target, a JU88 spotted them, and raked the aircraft in a burst of tracers, incendiaries, and bullets with steel tips that penetrated metal. The Wellington sustained considerable damage.  A fuel tank took a direct hit, a tyre burst and the hydraulics were damaged.

The captain immediately weaved and dived.  He saw the port wing tank was alight and took the plane into a steep dive and held it long enough to extinguish the flames. McFadden was standing in the astrodome looking out when he was hit in the leg. The torch he routinely kept in a front trouser pocket deflected the force of the explosive and in the process, was completely shattered.

Keith Campbell helped him to the canvas stretcher and secured a tourniquet around the top of his thigh in an effort to stop the profuse bleeding. He gave him a jab of morphine, so McFadden had no memory of the event until he regained full consciousness on his arrival in Yorkshire. In the meantime, the captain found the aircraft's hydraulics still worked.  He ordered the bomb doors opened so their load could be dropped into the sea. He then turned the aircraft around and it limped back home.

At the hospital, the doctor told McFadden that whoever had tied the tourniquet had undoubtedly saved his life. Over time, the two lost contact and each thought the other had not survived the war, until Campbell saw mention of McFadden in the Bomber Command Association journal. They made contact, and after 70 years, McFadden was able to thank him for saving his life.

After recovering sufficiently well to be deemed fit for combat, McFadden was sent to Malta, where he carried out night reconnaissance missions over the Mediterranean. On November 24, 1942 at 17.20, Bill as pilot, took off for a nine-hour patrol.  He spotted a merchant vessel with a destroyer just ahead of it. It took some time for McFadden to get into position to strike.  He had to calculate the speed of the target vessel, and get the plane to the right altitude – 80 to 120 feet above the water!  The second pilot saw the torpedo slice the surface and the destroyer turning away. McFadden turned the aeroplane round smartly and made for Malta – hoping he wouldn't meet a night fighter on the way. By this time, they were running seriously short of fuel. They arrived back in Malta at 02.56 am on November 25.

For this, McFadden was awarded the Distinguished Flying Medal with immediate effect. In December 1943, he was posted to Limavady in County Derry, Ireland as a torpedo training instructor. The day before he was due to fly to London to receive his DFM, he took off for one last flight. On return to base, the clouds were thickening, and he saw that the runway approach had been changed, and another aircraft was coming towards him. To avoid a crash, he immediately turned to fly up over the surrounding mountain, and hit a tree. He was flung from the aircraft, still harnessed to his seat with one ankle facing the wrong way. The plane burst into flames and one of his crew did not survive.

He spent much time recuperating in hospital.  After being commissioned, he was eventually promoted to Wing Commander and was posted to Overseas HQ RAAF London where he was made an RAAF liaison officer to both Coastal Command and Flying Training Command.

On his return to Australia in 1946, he resumed working for the Shell Company, and several years later, it dispensed with his services as his "seniority" in the company had lapsed in the intervening years.

He had always been interested in scientific developments, and saw there could be a future in optoelectronics.  He formed a company in 1976 which he called Warsash Pty Ltd after the village on the coast of Hampshire where he had witnessed (when earlier attached to Coastal Command) the departure of the craft on D-Day. He then investigated the companies in the UK and Europe involved in this aspect of scientific development and offered to represent them in Australia and New Zealand.  This offer was taken up, and over time, Bill came to represent a network of such companies in Germany, UK and the USA.  Warsash Scientific still has, not only a commercial relationship with them, but also one of friendship as well.

He leaves his wife, "M" McFadden, his son Robert, and his granddaughter Natasha Marshall.

A book, 'The Stars were Aligned', detailing Bill McFadden's wartime experiences is in the process of publication.