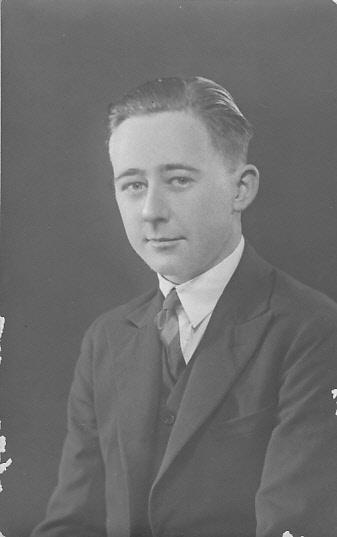 Dad (Colin) was born in Caulfield Victoria in 1917 and was 95 when he died. His mother was Norwegian and his father was Australian of English descent.  He had a sister Aileen and Brother Norman.

He lived his early life in Caulfield, his father worked for the post office, his mother was a stay at home mum and they didn’t have a great deal of money. As kids we used to visit his parents (our grandparents) in Carnegie and we used to love going there, Grandma would prepare a fantastic spread for us kids – cakes, softdrink, chips, lollies – it was heaven. Dad had a sweet tooth, he used to love cakes and we always had deserts after meals at home – it’s not hard to see where this came from.

He was involved in sport and the outdoors from an early age, and right though his life he has been very fit. When he was a boy his mum would worry about him swimming in Port Phillip Bay, as he used to swim long distances between bays. I remember when we went to the Olympic pool in Canberra as kids,  Dad swim lap after lap freestyle in a very relaxed style.  He also played cricket, tennis, Aussie Rules football, hockey and rowed for Richmond rowing club. In the 1930s he went skiing at Mount Hotham in Victoria in places accessible only by horseback.

He went to school at Malvern Grammar were he had a four year scholarship, but he left early when he turned 15 because it was the time of the depression in the early 1930s and to help his family he got a job with the Victorian Railways. Realising he was in a dead end job, he went to evening college and got his leaving certificate.  In 1936 he started a commerce degree part time initially in Canberra then at Melbourne University, while he worked – at this point in time at the sales tax office. In 1937 and 1938 he was in the University of Melbourne Rifles, a type of Army reserve but his experiences of walking miles soaked to the skin with a rifle and shivering in a tent lead him to be attracted to the more glamorous airforce. So when the war broke out in 1939 he went to enlist in the airforce. Unfortunately his job at the sales tax office was a reserve occupation and his application was refused.  He personally went to see the Minister for Air to plead his case but it was still refused.  He wasn’t happy about this and in November 1941 he quit his job at the sales tax office and enlisted in the airforce and was accepted.

His training ran for over a year and a half , he trained initially in NSW at Narrandera and later in Canada where he received his wings, then on to Britain and the Middle East.

This initial training didn’t go well. His first flight was in a tiger moth and he thought he was going to fall out because his harness was too loose, and his instructor thought he had no feel for a plane and didn’t teach him. Dad borrowed a book on flying, read it and fronted for the test. He went okay, except of a loop the loop manoeuvre which gave the examiner a big fright, but he passed this stage and his confidence grew. So much so that he participated unofficially with some other airman in the Narrandera air show, which raised a few eyebrows. 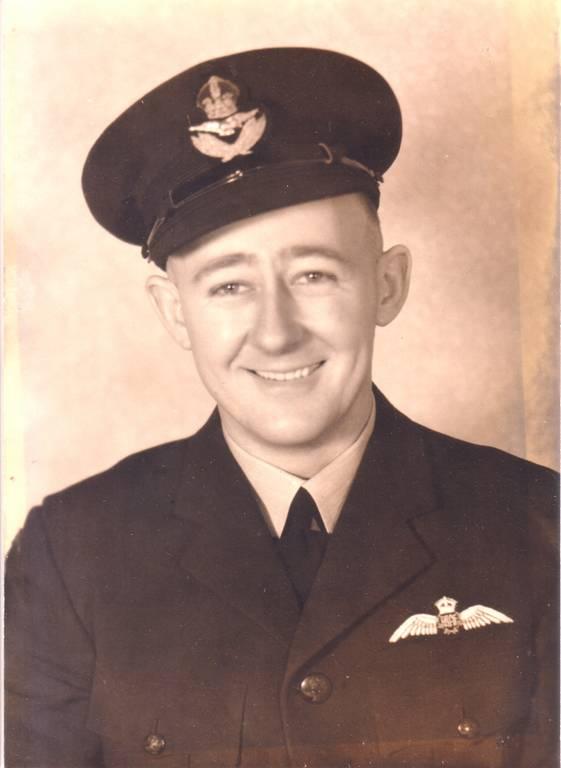 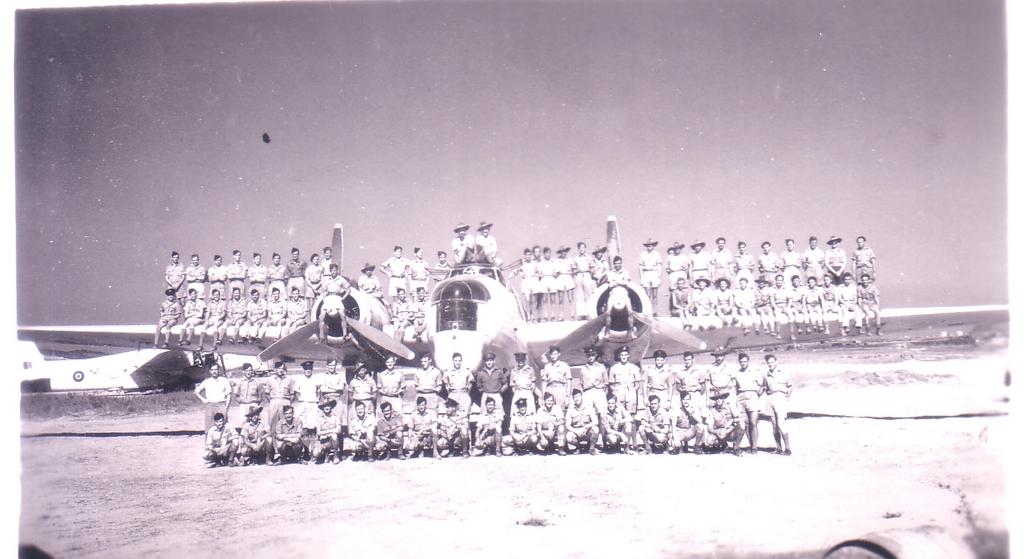 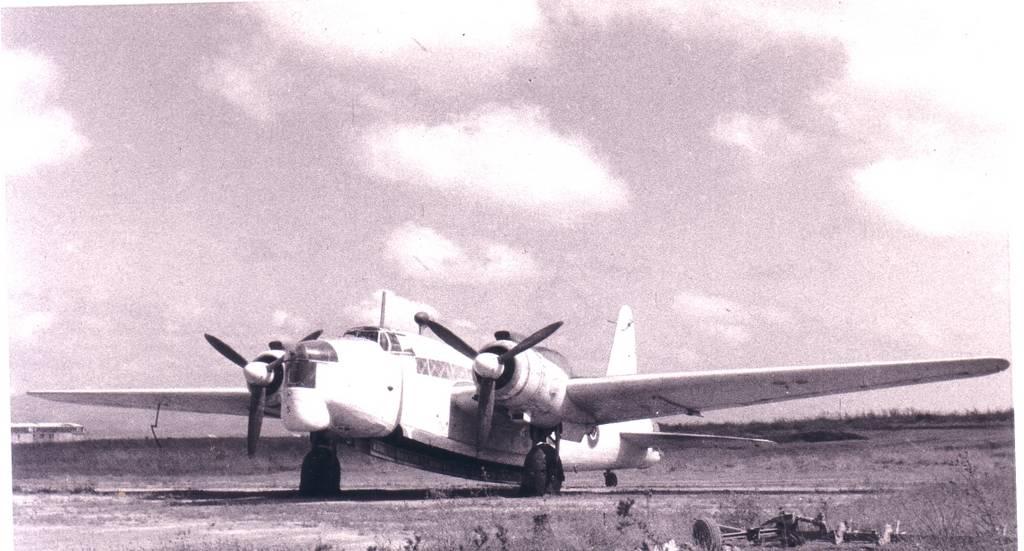 Dad was in the RAF Coastal Command flying Wellington Bombers in 458 Squadron. They operated most of the time in the Mediterranean doing torpedo drops, bomb drops and depth charge drops when they were protecting shipping convoys. He was the pilot and the planes had a crew of 6. He really liked his crew, they worked well and one incident in particular he never forgot and it still troubled him years later.

On return from a bombing run, a bomb had caught under the plane (hung up), they were not aware of this and when they landed the bomb went off. Two of his crew were killed and others badly injured. I believe he lost two other crew from shots fired from enemy aircraft.  He received a Mention in Dispatches which a bravery award, for removing an unexploded bomb off the runway, putting it onto a truck and taking it into the country to get it safety away. I believe he injured himself trying to get it off the truck as it was too heavy, luckily for him and us it didn’t go off. 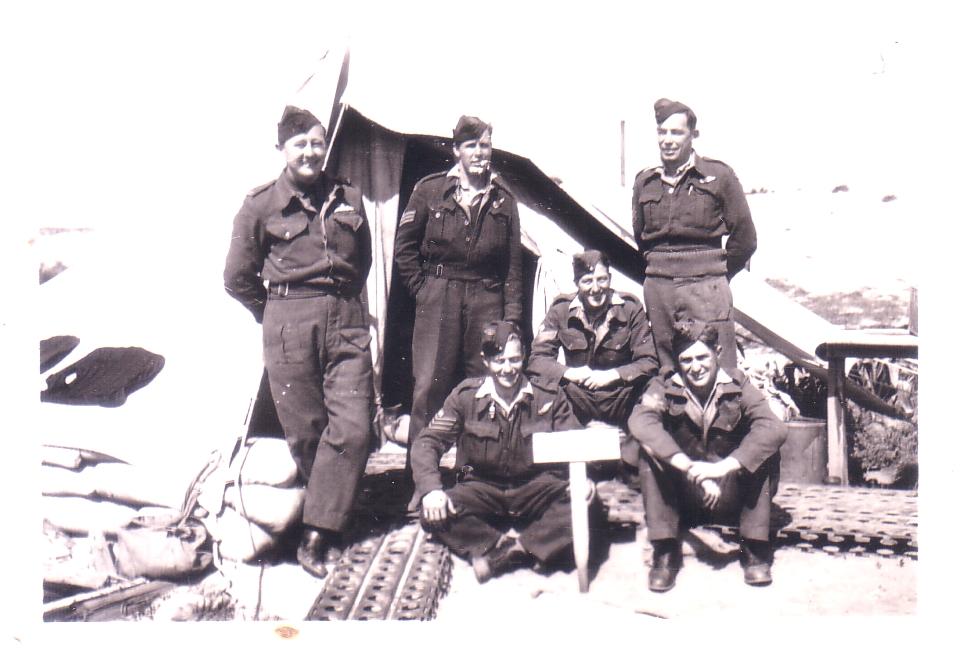 Colin and his crew

During this time he met a lot of people who remained his friends for life, and in later years he travelled back to these places and stayed with people he met during the war.  As an example of this - whilst in Scotland he and another Australian airman stayed with a Scottish family who had volunteered to put up airmen in their house. In this household there were three children including two girls aged 6 and 8. When he was in Egypt recovering in hospital after an incident, (I’m not sure what that was) he sent these girls some kangaroos he had made out of leather and small items of jewellery.  He saw them again years later, when they were considerably older as they had both retired, and they still had the things he sent them when he was in Egypt.

Dad completed his airforce duties and was discharged in June 1945 and returned to work the Taxation Office.  Around this time he went skiing at Mount Buffalo and met Greg Buckeridge who had also been in the airforce. Greg invited Dad to play tennis at their house where, occasionally an attractive young woman, June Buckeridge, Greg’s sister would come by, she never stayed long as she was working as an air hostess with ANA airlines (later became Ansett). On one occasion she had a bad tooth and had to take some days off work to get it treated, and Dad seized his opportunity and asked her out. They got married in December 1946.  Mum was a lovely woman and they were very well suited. 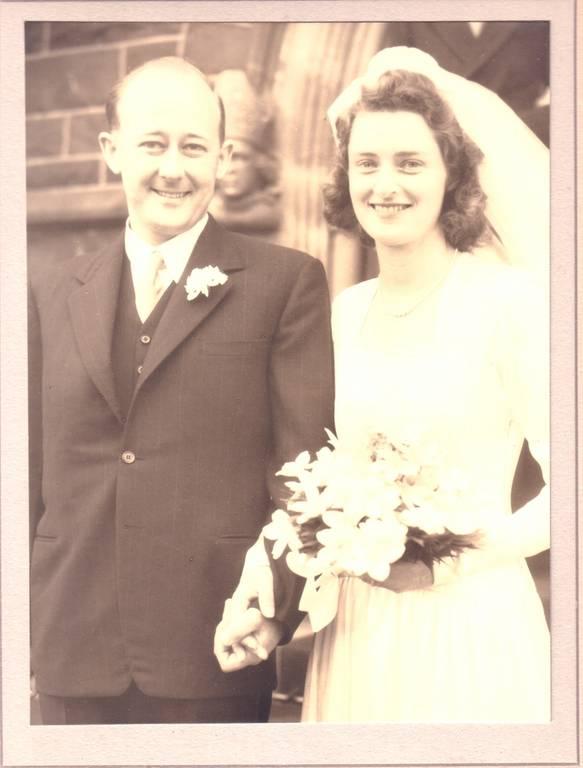 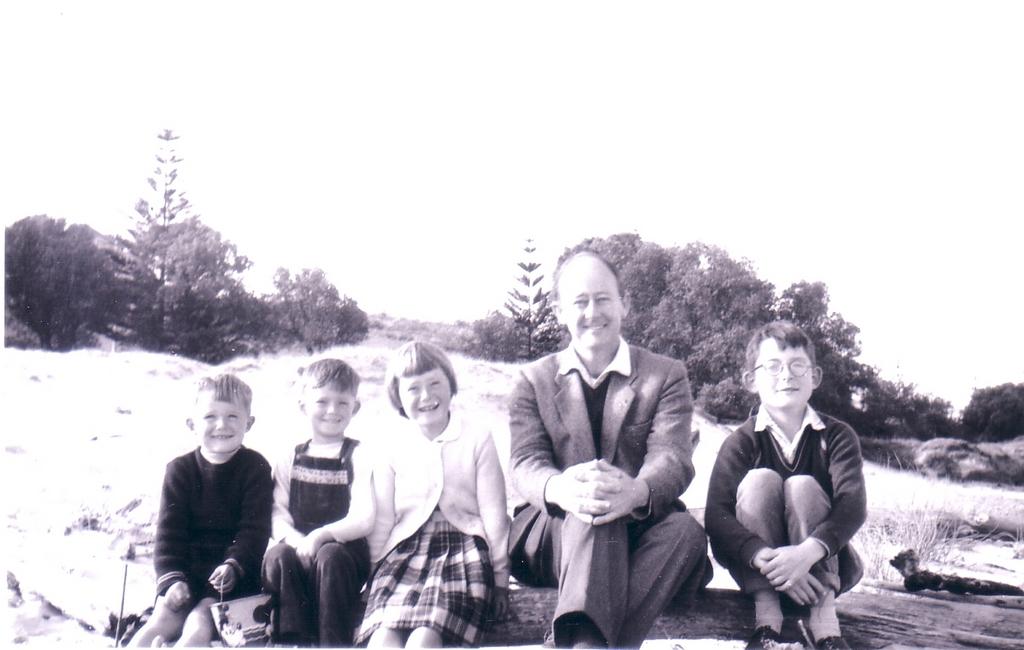 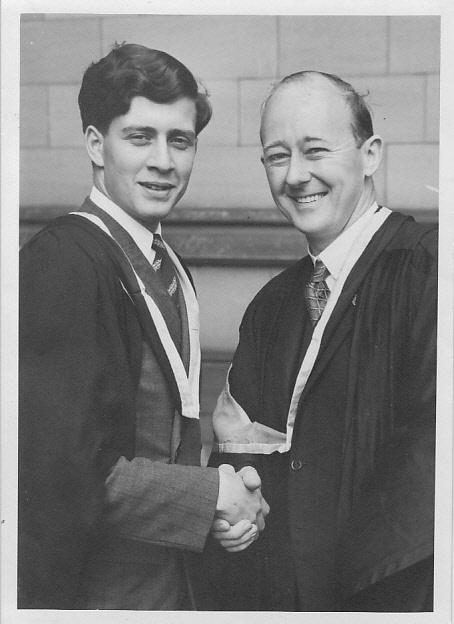 They initially lived in the Melbourne suburb of North Balwyn. Dad completed his Commerce degree in 1948, and Bruce and Alvie were born whilst they were at North Balwyn. Dad received a promotion and moved to Canberra in 1954 (I believe it was the Treasury Department), and built a new house at Reid which was the family home for 50 years until dad moved into the Morshead retirement home several years ago. Dad was very handy and created the garden, it was like an orchard, with apples, peaches, nectarines, tomatoes and sweet corn, laid the concrete for the paths, drives, build a workshop and shed, he could put his hand to anything.

While in Canberra, I was born followed by Stuart and then Peter. Our life as children was idyllic.  We were a close family, we always ate together at mealtimes, always had dessert after dinner (Dad’s influence), stricter than these days but very supportive. Dad took an active interest in our schools and was  involved in the P&C meetings, helped with homework, he was involved with Community such as Rotary and the Air Force Association back then as well,  mum stayed at home and looked after the family. In those days Dad would not stand for any nonsense from anyone, and that included neighbours and teachers on one or two occasions who he would confront. I have a vivid memory from when I was very small, a magpie was terrorising kids in the area, so much so that they were afraid to go to school or would run onto the road trying to get away from it. One morning dad decided he’d seen enough so he went outside and chased the magpie up the street, it was on top of the telegraph poles and dad couldn’t reach it, but he certainly knew dad meant business and wasn’t someone to mess with.

We were a single income family, but dad managed to send us all to private schools in our high school years, and we always went away for holidays in the school holidays, usually Melbourne at Christmas to see the relations and the south coast at other times.

There was a sad time when my mother died of breast cancer in April 1978.  Peter was only 14, but Dad made sure that everything carried as normal for Peter, including going on holidays – they went to Heron Island and to Mexico, and he still just as supportive and caring for his other children.

This is the time he started to move into a new phase in his life by increasing involvement in the community and various charities. This included volunteer work on the RAAF Memorial Grove on the Federal Highway on the outskirts of Canberra and volunteer work for the Ryder Cheshire Foundation. He also started to travel overseas, particularly to places he had been to during the war and renew friendships he had during the war, friendships he said lasted forever. He had an interest in our family tree and met up with the Atthorpe society in England which was related to a branch of the family, and went to various airforce reunions.  He also took up social activities including square dancing, clogging and became an active member of the Dante Alighieri Society and learnt to speak Italian.

Around this time there were a few widows Dad knew, who he liked and was interested in, but he never married anyone else, although he has expressed some regret in more recent years about not showing more pluck and remarrying. His love for June however was never diminished. 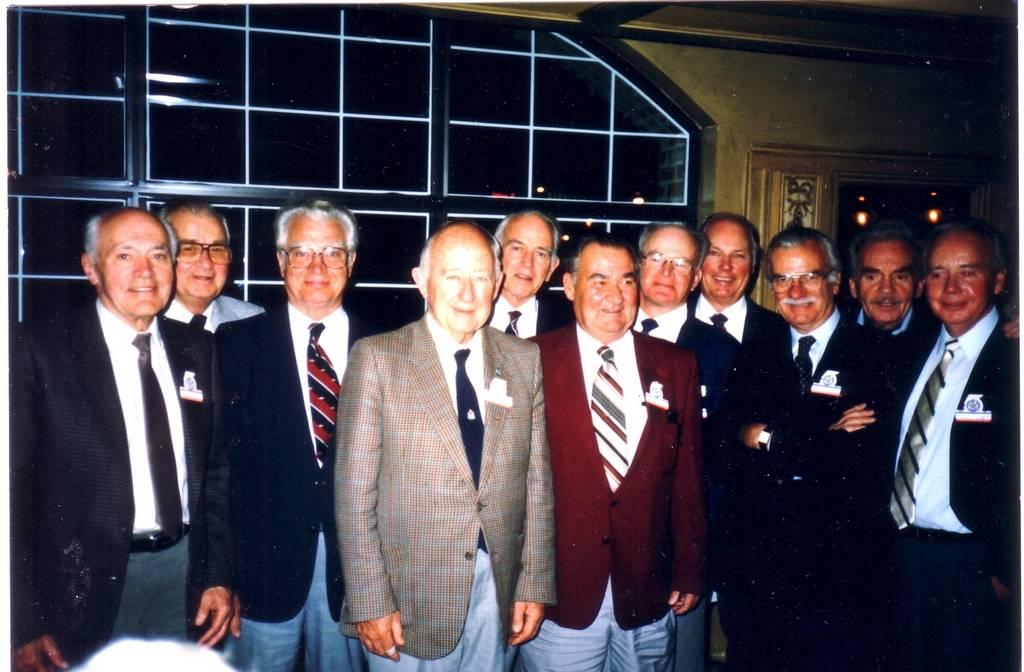 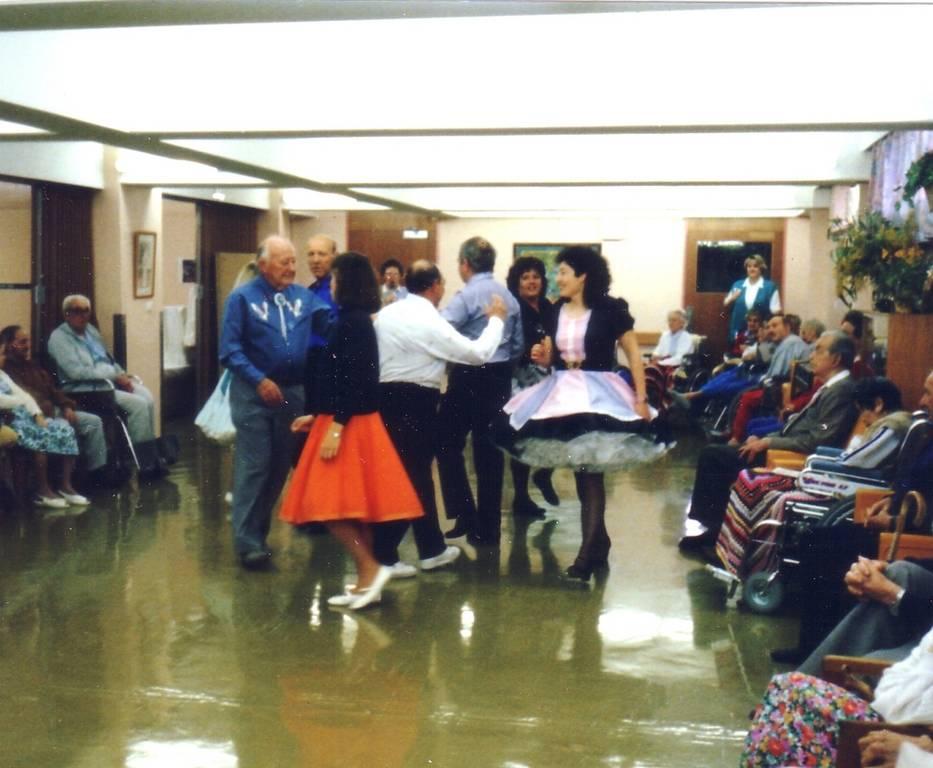 My father received an Order of Australia Medal in April 2001 for his service to the community for many years, including his involvement in the Ryder Cheshire Foundation, the RAAF Association, volunteer work at the Sir Leslie Morshead Veterans and Aged Persons Home in Lyneham, zone leader for Neighbourhood Watch, member of Lions and the Square Dancing Society.

Dad has always marched in the Anzac day marches in Canberra every year, more recently he has attended but watched from the sidelines.

Gradually over his later years his age and declining health slowed him down but he was always thinking about his family. The final straw was when he developed cancer of the oesophagus. In spite of this he was quite cheerful and seemed to be his normal self when we saw him at Christmas and was more concerned about us than himself. 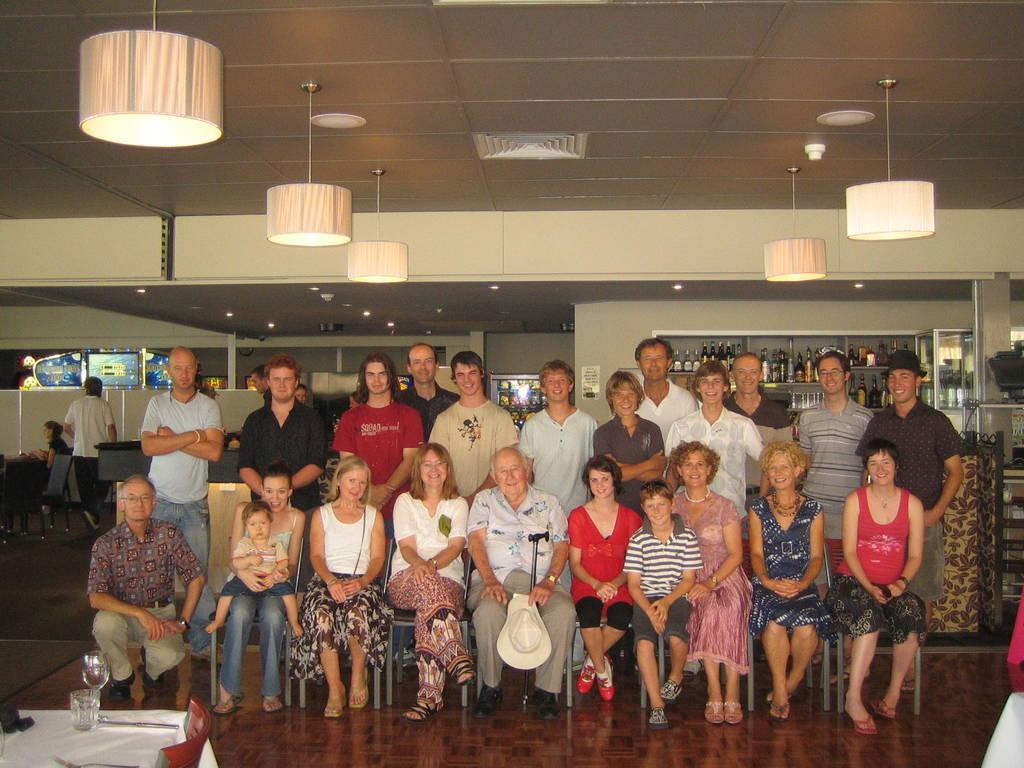 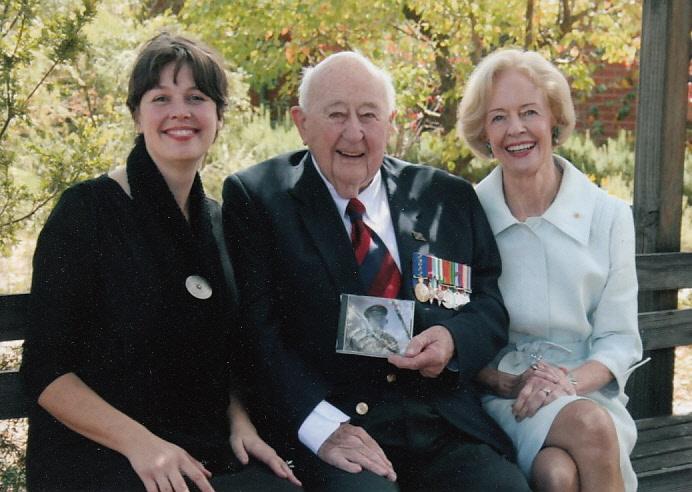 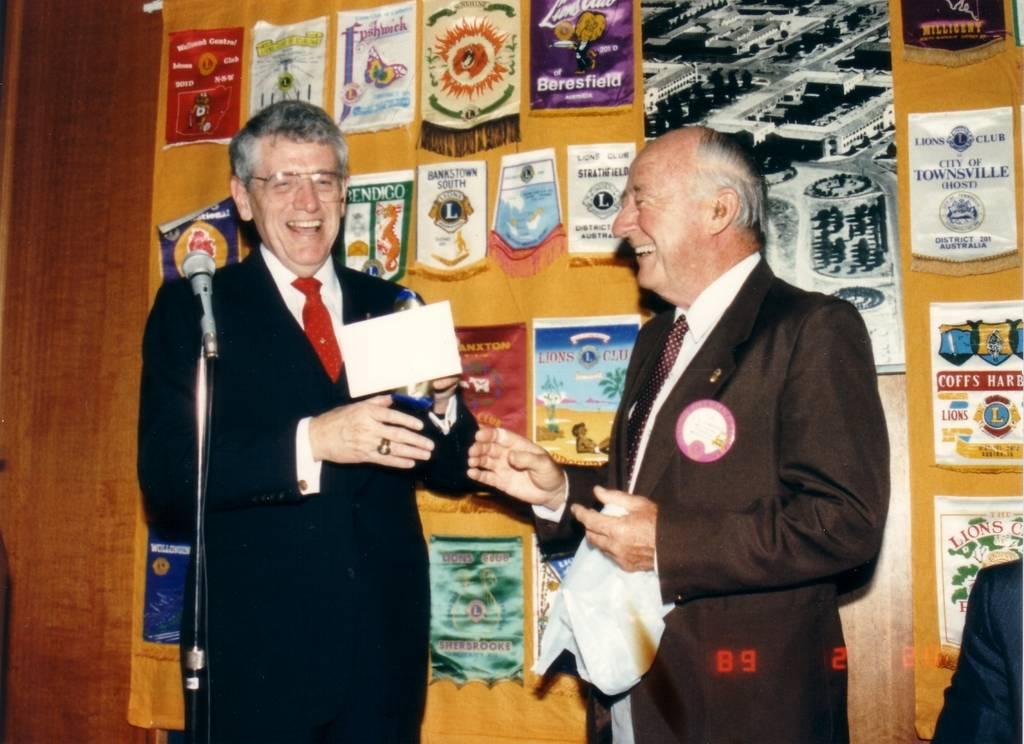 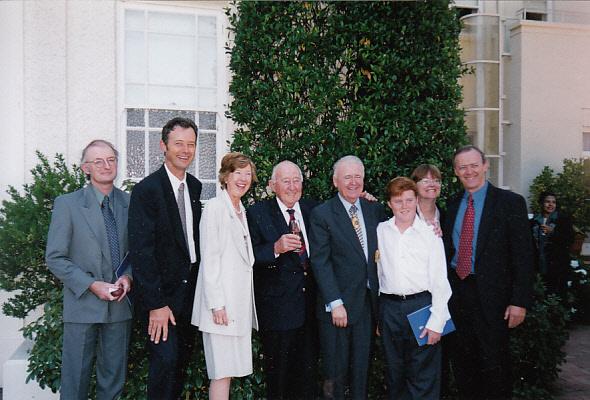 He was particularly sick just over two weeks ago and I saw him with Alvie and Bruce and Alvie’s friend Karen and he seemed happy that we were there and was more concerned about us. He knew Stuart was overseas and returning in weeks’ time, and he did get to see Stuart – Stuart will be talking about this soon. 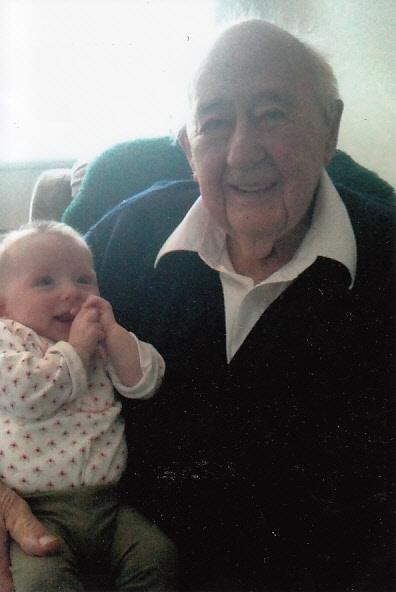 Dad had a remarkable life, many things I only learnt this week when researching for this eulogy, as he was always such a modest person and didn’t say too much about his past. He leaves behind his five Children, eleven grandchildren and three great grandchildren, all of us proud to have been part of his life. 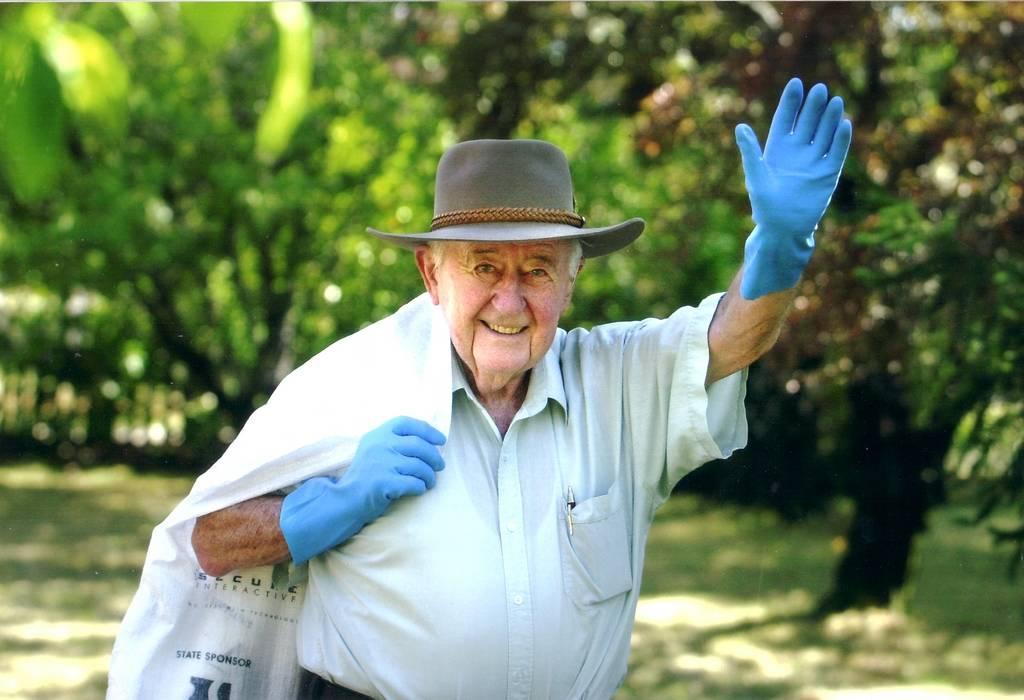 Thank you to Colin's son John Fereday who wrote and kindly gave permission to use his eulogy.