Keith's inspiring service and life story was detailed in the Brisbane Courier Mail on 20/1/2012: 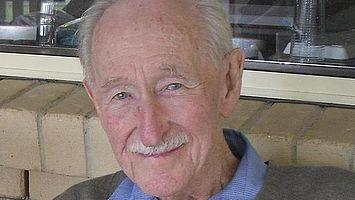 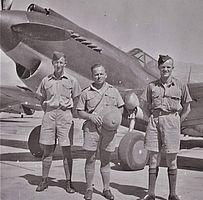 Keith Austin on the left 20 August
1941 at Rayak Lebanon

He was construction manager for such iconic buildings as the Royal Australian Mint and the Administrative Building during the 1950s and 1960s, when Canberra was undergoing one of its most important phases of consolidation.

Later, he was one of the men who helped in the huge and complex task of transforming PNG from a protectorate entirely reliant on Australian expertise into an independent, modern nation.

Born Colin Arthur Keith Edward Austin in Woy Woy, NSW, in 1913, he was known to his parents and three older sisters simply as Keith, his two older brothers liked to call him "Joe" and some of his workmates later dubbed him "Cake", but to most he was Keith Austin.

After World War II broke out, he enlisted in the RAAF in July, 1940, and served in Egypt, Tunisia, Libya, Algeria, Palestine, Syria, Malta, Sardinia and Italy as a flying officer, working on aircraft engines with No.450, No.458, No.465 and No.3 Squadrons before he was eventually discharged in 1945.

Like so many other servicemen, Mr Austin seldom spoke of his experiences in those difficult years.

However some of the things he saw have been preserved through his photography. A keen amateur photographer, many of the images he took during the war were later given to the Australian War Memorial and were used in the book and the film on No.3 Squadron.

Another clue to his experiences was the Malta George Cross 50th Anniversary Medal he was later awarded for his service during the siege of Malta.

A mechanical engineer by training, Mr Austin had joined the NSW State Department of Works in Sydney in 1938 before the war interrupted his career.

After his discharge he continued with engineering and in 1954 moved to the Commonwealth Works Department in Canberra as construction manager during a period of great development and change in the capital.

There, he was responsible for handing over the functions of Commonwealth Construction to the PNG government in the countdown to the nation's independence.

Mr Austin returned to Melbourne, where he finally hung up the cap on a distinguished career which saw him appointed an Officer of the British Empire for his 41 years of service to construction in the Commonwealth.

Among his many professional honours was being made a fellow and chairman of the Canberra branch of the Institution of Engineers Australia and a fellow of the Australian Institute of Management.

A great believer in supporting his community, he was a member of the Brisbane Cricket Ground, the Queensland Cricketers Club, Rotary, Legacy and Red Cross.

In his youth, Mr Austin had been an A-grade tennis player. Later in life he developed a reputation as a golfer, bowler, fisherman and, in particular, a woodcarver.

Studying woodcarving under Elvin Harvey and Geoff Hannah, and with occasional help from his artist wife Esther who drew up designs for his carving and marquetry, over the years he turned out some very beautiful furniture including wine tables, a hall stand, coffee tables and even a grandfather clock.

His creativity extended to many projects around the house from creating gardens to building pergolas, garden seats and ornamental bridges.

A man who never gave in to sickness and would rather cut down a tree than spend a day in bed, during his final illness his strength, determination and courage were marvelled at - and underestimated.

Mr Austin is survived by his wife of 60 years, Esther, and daughters Jill, Carol and Lesley and their families.